The L Anne Chronicles - Chapter One Hundred And Twenty Nine

Back in chapter 126, I showed you how Lori Carrington (as she now goes by, not L Anne Carrington or Lori Dennick) is now pretending to be an author whilst she pushes her dreadful book 'The Cruiserweight' onto the unsuspecting public. (I wonder if she left in the rape scene where the Brian Kendrick character rapes some 'uppity cunt'.)  This book is a poorly written, piece of stolen WWE storylines ,crap. Lori is now trolling many small publishers websites and blogs to try to drum up interest in her terrible book,  and thereby causing more people to Google her and end up here.

Lori recently twittered about a new publishing company that claims to be in Pittsburgh. That thriving metropolis will soon outgun LA and NYC at the rate Lori is imagineering the place. This new company is called Paparazzi Publishing. What do you think of when you think paparazzi? TMZ and other gossip sites, no doubt, celebrities and their fad diets and love lives. According to the owner of the site, that's not what she thinks.

Nice typo in the slogan up the top there!

Wow! Look at that! Brand new and already there's a Lori piece up there! What the? And what else do we see when we scroll down the page (done so professionally in Blogger):

So wait. A brand new publishing company handing out awards to writers? Including giving a Best New Sports Author award to the woman who came runner up in the Misc Sports category? What gives?

This piqued my interest. It's remarkable how many gullible people fall for Lori's lies without Googling her, so I decided to check out who Jeni Sanfort is, the claimed owner of the site.

Oddly, when you Google her name, this new publisher who surely would have a few networking connections out there, a background in books, all you find are links that take you to L Ard.

Which is odd in itself as the first name is unusually spelt and the surname is a lot like a Jenny Sanford who has featured a lot in the news lately. There's no record of Jeni on White Pages or other freely available sources of public record.

As for the Google results, the first two are Author's on Show, the bad writers blog run by a medium who isn't psychic enough to tell that Lori lies a lot. WWE-Club is where Lori posts on a wrestling forum about Brian Kendrick and sucks in a small group of sycophants with her lies about her life. Then there's New and Good Reading, which is Lori's bad writing blog. About herself and her attempts to attention whore herself across many bad writers blogs and sites.

Seems mighty thin for a publisher! Even one just starting out!

Jeni doesn't appear to exist beyond L Ard's boundaries. Why is that?

Neither does her publishing company.

These are the top ten results on Google for searching Paparazzi Publishing. Odd, huh?

Jeni can't even seem to throw a decent shindig! 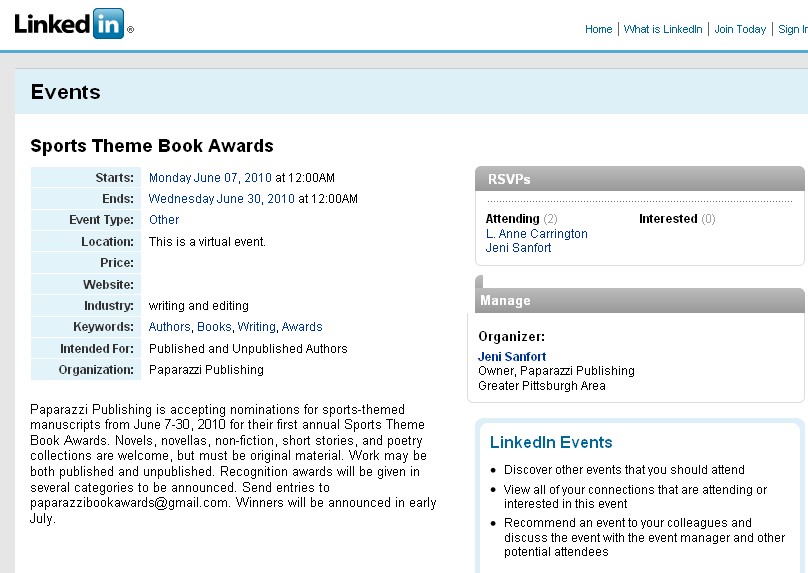 The only attendees are Jeni and Lori? Really?

So, who is Jeni? Is she another Lori Dennick sock puppet? Or is she real? If so, why would she have such a non existence until now when closely aligned with a pathological liar and plagiarist who has a very long history of deceptive behaviour as well as multiple felony convictions?

Jeni? Who are you? Did you really go to those colleges? Why don't they have any record of you either? Did you ever do any research into your new BFF, Lori? Perhaps you need to read MY books, they might answer some questions you may have about her.